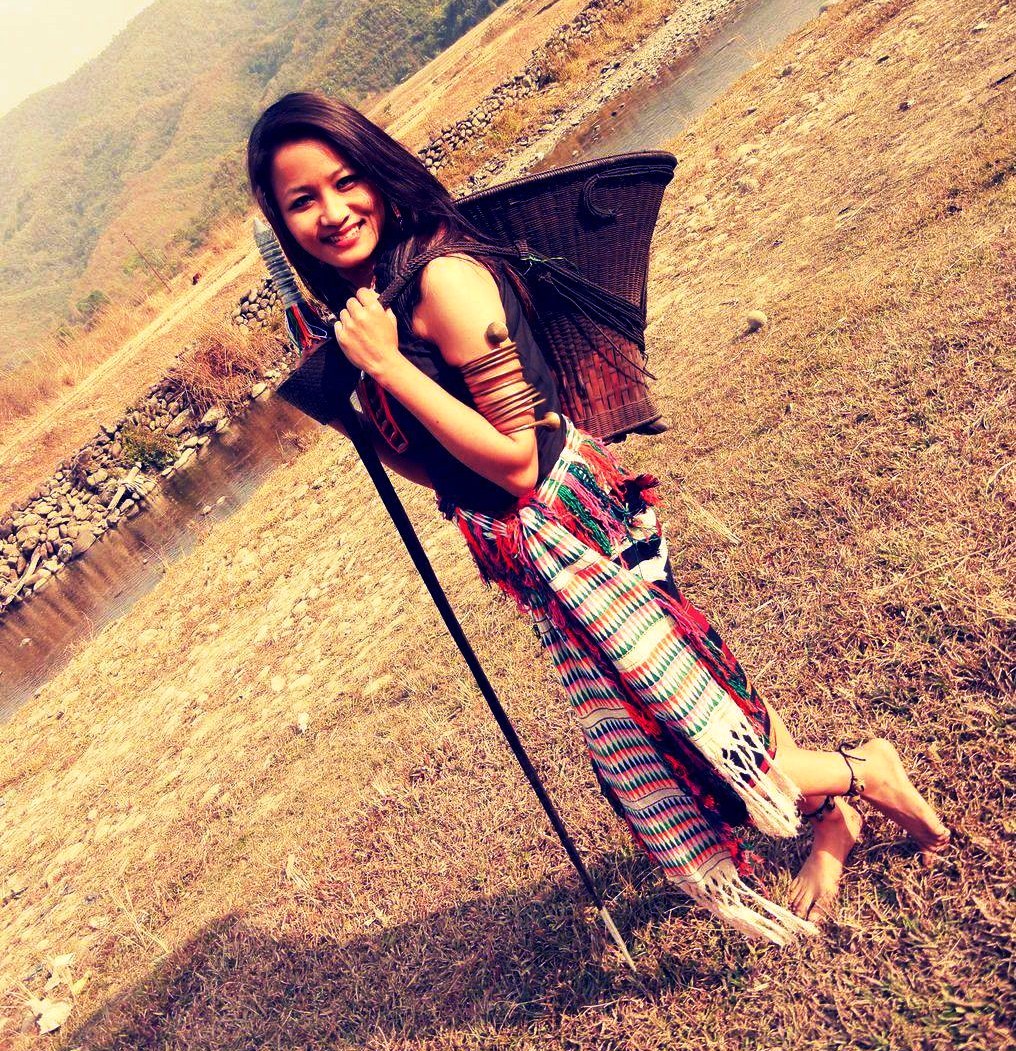 Legend has a touching story about the relationship between Meetei and Thangal tribes of modern day Manipur. The Thangal tribes were created by God from the beginning of the earth and they continued to live on here. They are one of the most important tribes in Manipur with indigenous culture and traditions.

In the Indian Constitution, they have been recognised as Koirao in the Schedule Tribe lists, which the Thangal people are not happy. Often this led to the confusion of the identity and racial status among the historians, social anthropologists and sociologists. Later on, they diluted themselves into the Naga group, losing their own identity as Thangals for generations to come!

During the British period, these tribes were known as Kolya, Koirao and Mayangkhang. Brown (1873) in his monumental book “Statistical Account of the Native State of Manipur and the Hill Territory Under its Rule” cited that these community inhabited a large part of present day Sadar Hill Areas of Senapati District in Manipur. They covered Tangal, Mow, Murram, Purul, Turengba, Meitheipham, Meeyang-khang and Tokpo-khool. Oral history of the Thangal tribes indicated that they used to live in the entire region of Sardar Hills Sub Division which was known as Thangal Hills.

According to 1981 Census report, Thangals population was 918 ( 468 male and 450 female). It was increased to 1691 (850 male and 841 female). The community had a well established administration among themselves. Their social, economic, cultural and religion system are also unique and organised.

Folk tales of the community tells that the Thangals were the descendents of the eldest of the three brothers while the second was the progenitor of the Tangkhuls and the third, of the Meeteis. Earlier they were believed to live together in a big house called Gonkai (house of the chief), somewhere in the present day Senapati District.

When they grew up, the second brother, expressed his desire to establish a separate settlement area of his own. The eldest brother had advised him to carry a basket (anthrop) on his back while searching for a new land. He was also told to roam until his basket broken into pieces pouring down the pebbles and sand.

After crossing mountains, rivers and forests, the basket was busted at a place now known as Hungdung (in Ukhrul District). There, he established his new settlement and became the forefathers of Tangkhul tribe. This story suggests that the Tangkhuls have their first dwelling places in the caves of Hundung.

Finding no other ways to prevent the wills of his youngest brother, he gifted a magical stick made of reed, ‘tou’ and told him to go until the stick turned into a reed plant. This way all the three brothers were separated and only the eldest brother continued to live in their original home.

The youngest brother also left Gonkai with the magic stick to discover the new land. After travelling a long distance, he arrived at a place where the magic stick had turned into a reed plant. Today, the place is known as Toupokpi ( tou – reed, pokpi – birth). After staying at Toupokpi for some years, he shifted to Kangla, the capital of Meetei kingdom. At that time, it was surrounded by water on all sides. In spite of all odds of natural calamities, he was successful to maintain his settlement area in and around Kangla. In due course, he became the fore-father of the Meeteis.

It was believed that in the beginning the three brothers maintain a cordial relationship and they help each other. Kangla was surrounded by water, so they managed to send vegetables and other edible items grown in their hills.

In due course, the youngest brother became strong and powerful that demanded gifts rom his two elder brothers in the form of Loipot (tribute). Hostilities started among the brothers that their relationships became weaker and weaker. However, the eldest brother always loved his youngest brother in times of difficulties. This incident shows the relationship of Meetei and Thangal tribes.

Of all the Thangal villages, Thangal Surung (cave) is the most hostorically popular village located nearby Saikhul sub divisional and block headquarters. The village of Thangal Surung was established by Anthangmi clan of Thangal tribe. The Surung has divine and marital relations with the Kangla. The village was highly respected and given royal privilege as well as status by the King of Meetei Leibak or Kangla.

It was believed that if sesame seeds were poured into the cave of the Thangal Surung, the same seeds will come out at the mouth of the surung situated at the Kangla. Similarly, if a cock was thrown into the kangla surung, the same would came out from the mouth of the Thangal surung. It was treated as a secret passage for the Meetei kings. Religious rituals were also carried out with pomp and grandeur by Meetei kings as well as the Thangal people.

The caves of Thangal were so closely associated with the legendary account of Meetei kings like Charairongba and his successor, Pamheiba. There was strong friendship between king Charairongba and one khullakpa (Chieftain) of the surung village. The khullakpa and his wife, khullakpi had regularly visited the royal palace. When they were in the valley, Nungthil Chaibi, one of the queens of Charairongba, gave birth to a boy. The queen was expelled by King for having secret relationships with a Mayang (Non local ).

Fearing to lost his son, Nungthil Chaibi concealed the news of her newly born child to the royal palaces. She then persuaded the Thangal couple to carry away the child along with them. The khullakpa who had regarded the queen as his own sister was determined to adopt the child in his village. Concealing the secrecy, he covered the child with leaves of the trees grown nearby and put it inside the basket of his wife.

On their way, the baby was crying with hunger. As a divine destiny, at the crying sound of the child, the khullakpi’s breast became full with milk. She fed the child with milk at that place. Today the place where the foster mother gave milk to the child was known as Khomidok or khom-inthok(khom – milk, inthok – breast feed).

After travelling a long distance from Kangla, the khullakpi requested her husband to take rest for food. They kept the sham (basket) under a tree to protect the child from scorching sun. When they began to take food from the chakyom (tiffin carrier), the sham and the child was about to fall on the ground. Luckily the khullakpi rushed to the spot and saved the child from falling. The place where the child and sham were saved from falling was known as Shampei (sham – basket, pei – leaning to fall).

When they reached the village, the khullakpi was feeding the child sitting nearby a big fire place in their room. Suddenly, she saw a little hole at the corner of her room. The khullakpa tried to close the hole in vain. He ordered his people to cover the hole with the whole earth they had in the village. However, they failed to close the hole. Seeing no other means, they began to worship the hole, which had appeared to be a cave.

Several years later, the khullakpa had paid a visit to the Meetei king. Nunthil Chaibi was anxious to know about her son who was in the Thangal village. ” Oh brother, How old is the cock that I presented to my friend, the khullakpi?” Understanding what the queen meant, the khullakpa replied back,”Oh sister, the cock of the Meetei land starts crowing.” On hearing their conversation, the king became suspicious of a plot against him. Fearing a conspiracy, he determined to punish the Thangals.

Consequently, Charairongba invaded the Thangal village. The king was leading attack mounting on a dolai (palanquin). While they were crossing the Iril river, all the horses were lost. Since then, the place was known as Sagolmang (sagol – horse, mang- lost).

When they were at the vicinity of the Thangal village, a mysterious clod had enveloped the whole mountain range, hiding the village. The king realised that it was God’s will, blocking his way to the village with evil designs of war. He promised himself not to invade the Thangal village any more and alighted from the palanquin not to go further. The place was known as Dolaithabi (dolai- palanquin, thabi- stop). To his surprise, the cloud disappeared and the sky became clear.

The king kept his promise and he alone proceeded further to the village without any soldiers to follow him. On the way, he felt exhausted and started to look for a shady tree. When his search were in vain, the king cursed the Thangal hills to be barren for not having shady trees. Today, the Thangal hills are not fertile as believed by the people, referring to that curse.

At last, the King entered the Thangal village who gave a warm welcome with love and respect by people. The king was moved by the divine austerity and wit of the boy who stays in the khullakpa’s house. When enquired about the child, the khullakpa narrated everything to the Meetei king. It was a happy reunion between the father and the son. Thus, a prince was adopted by the Thangal people and a new relation was made between the two community.

However, with the arrival of Christianity and Hinduism in the land, bonding between the Thangal and the Meetei became a love-hate relationship. Now,it is necessary we remember our rich cultural histories for a united future.

Religion is just an adulteration of our body from outside. It can’t alter the blood-relation among the three brothers – Thangal, Tangkhul and Meetei.

Today’s generation must understand this loving relationship between Meetei and Thangal in the days to come!