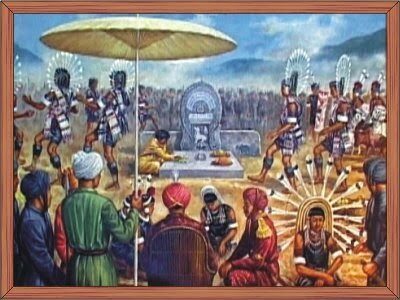 Relationship between Manipur and Naga Hills shows Meetei kings have good relationships with the neighboring tribes since ancient times. We cannot forget the relationship among Meetei, Angami, and various other tribes of Naga Hills.

The concocted fiction by few researchers that Meetei kingdom is concentrated only in the valleys around Imphal is to misguide the world. Records and historical treaties between Manipur kingdom and British shows the relationship of Manipur with Naga Hills.

Will any hill researchers show to the world the relationship of so called Manipuri Nagas with those tribes living in Naga Hills? They will weave stories on Naga Club, Labour Corps only, not much beyond that event.

However, relationship between Manipur and Naga Hills are known to the world since ages. British first encounter the Nagas in 1832 when Meetei King Gambhir Singh, along with two British officers Captain Jenkins and Pemberton was looking for a passage through the hills to enter Assam plain around the Lakhimpur and Sibsagar area.

In the early parts of the 19th century, Burmese invaded, Naga Hills, Assam and Manipur. Manipur defended the region and drive out the Burmese in 1825. British took over the administration of Assam in 1830. After British controlled Assam, the Angamis and Zeliangrongs frequent raids in North Cachar and some parts of Manipur in the North.

Similarly, the Lothas, Ao, Phom and Konyak carried out raids in North Western side of Manipur and Assam. The main purpose of raids was to capture people to sell as slaves.

After signing the Anglo-Manipur alliance treaty of 1833, British know that Maharaj Gambhir Singh of Manipur had in mind the permanent conquest of Naga Hills. The Southern part of Naga Hills was controlled by Manipur.

In early days too, Manipur did not interfere in the affairs of Naga Hills after the expedition in 1833. This was mainly due to a Treaty of Non -Interference Policy signed between British India and King of Manipur in 1851.

Meetei Ningthou Gambhir Singh stayed in Kohima for a month. The Angami tribes gave 100 bullocks to him. In exchange for the release of captives, they gave another 100 bullocks. During his stay in Thibomei, the Ngamai khullen and Ngamai khunou villagers came to Meetei Ningthou and declared submission, giving 400 bullocks, elephant tusk and 200 baskets of teel seeds.

Meetei Ningthou Gambhir Singh put his footprints sculptured on a stone on the bank of Ishingkhong Pukhri as a token of conquest in Thibomei on 10th February 1833. This stone erection ceremony was performed with the Naga villagers. On this day, Mera Mechamai, Tonloi, Chamai, Pettamai Khunou and Khullen, Uttu Washamai, Wahamai, Khisami villagers gave 600 heads of Cattle as tributes.

In 1850-51, number of Meetei had close relations with a number of Nagas (particularly Angamis). The joint neighbors demanded Manipur’s rightful throne to Maharaj Chandrakirti Singh and Kabaw valley compensation to him.

Whenever a Meetei visited a Naga Village, he was treated as an honoured guest, at a time when a British subject could not venture into the interior without risk of being murdered. After the death of Maharaj Gambhir Singh in September 1834, The Nagas became free from the tribute systems to Manipur.

It was believed that Nagas came to Maharaj Chandrakirti Singh to fight war against the British. Though aid was not openly given by the King of Manipur, no doubt the Meetei helped the Angamis.

British found out that the attacks against them in Naga Hills were always made by Meetei factions who don’t want alliance with the British. In every Angami village there were two parties, one attached to the interest of Manipur and other to the British.

Manipur had its firm foot that it was to live peacefully to its original political sovereignty. The Political consensus of Manipur was for a peaceful co-existence with its neighbourhood.

While final decision to make the Naga Hills a British district was taken in 1881. Naga Hills within the administered area consisted of more than eight tribes, quite different from one another, quite different in languages which could not be understood by each other. There was no unity among the Nagas, It was only the Anglo Manipuri alliance that was holding the Naga together.

Thus the newly created District of British India lies between 25o2’ and 26o47’N and 98o17’ and 94o52’ E and covers an area around 8600 square miles; on the west by Sibsagar, Nowgong and the north Cachar Hills; on the South by the Princely state of Manipur; and on the east by the mountain ranges inhabited by independent Naga tribes.

The outbreak of Naga war of 1879 and the revolution in Naga Hills was a watershed in the political history of Naga Hills.

Of the two neighbours, the first movement against British was occured in Manipur in the form of First Nupi Lan (Women’s war) in 1904 and Second Nupi Lan in 1939. In Naga Hills, the First World war veterans formed the Naga Club in 1918. However, this was not against the British. It was, however, the harbinger for a Naga Nationalism.

When Naga National Council (NNC) was formed in 1946, consisting of various Nagas and Kukis in the Naga Hills District, the main policy was to safeguard Naga’s interests after British left India. Series of movements continued under the able leadership of Angami Naga, A Z Phizo who sowed the seed of Naga Country.

NNC itself is a united representatives of various Naga communites and symbols of each Naga are seen in the group. The Highest and must respected “Naga Parliament” came to be known as “Tatar Hoho” after the Sema, Lotha and Ao word for “Village elders” (tatar) and the Lotha and Sema word for Assembly ” Hoho”. Rengma word for king or supreme head “Kedahge” was used for “President” of the Federal Government of Nagaland. The Yimchunger word for village Councillor was used to represent Ministers as “Kilonsers”.

Such combination of different communities shows Naga Nationalism are for the whole Nagas who have been fighting since 1832 till today.

To wage war against the colonial Indian forces, the first major contigent of 150 Naga rebel troops touched the Naga soil in 1962 from East Pakistan (now Bangladesh).

While in Manipur, Hijam Irabot formed the “Independent Peasant Republic” and its armed organisation, the Red Guards was formed in March 1950. However, the first Meetei revolutionary movement died with Irabot in 1951.

Later, another movement came up on 24 November 1964, termed as the “unfinished revolution of 1948”, the United National Liberation Front (UNLF) headed by Arambam Samarendra to liberate Manipur from Indian colonial occupation in the larger context of liberating the entire Indo-Burma region for a Common future.

Like the NNC, UNLF too is a composite body of various ethnic communities in Manipur, particularly, the Kukis and Kabuis who belive in a united force to fight against the Indian Occupational Force. Arambam Samarendra was successful in joint struggle with the Thadou and Kuki Chin movements. He was dreaming for a Pan Mongoloid movement to include all Mongoloid people of Indo-Burma region.

Unfortunately, UNLF mission to the Naga Hills was obstructed, may be time was not ripe or communication gap between the leaders. Samarendra went to Kohima to meet NNC leader, Imkongmeren Ao, who was the Vice President of NNC. Not only the meeting for a unified force was a failure, but it was unfortunate in the history of two neighbours, Naga Hills and Manipur.

Lungshim Saiza, a Tangkhul leader who married to one of the niece of A.Z.Phizo not only made derogatory remarks against Meetei, but he was reported to have told the visiting Meetei leaders in Naga Hills to meet the “Nagas only when the time’s ripe”!